The Los Angeles Philharmonic will release “Hollywood Bowl: The First 100 Years,” a new book, vinyl box set and podcast series celebrat­ing the 100th season of the iconic venue, on Friday, June 3, to coin­cide with the opening night of the 2022 season. The commemorative collection preserves and pays trib­ute to some of the most notable and cherished moments and perfor­mances from the Hollywood Bowl’s storied history.

“Over the past 100 years, the Hollywood Bowl has been home to some of the greatest memories in the performing arts,” said Chad Smith, LA Phil chief executive offi­cer and David C. Bohnett chief executive officer chair Chad Smith. “Some of these moments are per­fectly captured in a photograph, others in a recording and some need to be told firsthand. To best cele­brate the centennial, we knew we needed to produce a book, a collec­tion of recordings and a podcast series to honor our history and com­mend the diverse range of artists who have performed on this iconic stage.”

Especially noteworthy are the story of Princess Tsianina, a Cree/Cherokee soprano, and the Inter-Tribal Festival; the remarkable legacy of the Bowl’s most popular and enduring singing star, Ella Fitzgerald, who holds the rare dis­tinction of having sold out the venue across five decades, from the 1950s through the 1990s; a behind-the-scenes look at film music at the Bowl and the first live performance of John Williams’ film score to Star Wars; and significant moments in Los Angeles history, such as the anti-nuclear “Survival Sunday,” the first political movement to make the Bowl an annual tradition in the late 1970s and early 1980s, and the AIDS benefit and Star-Spangled Night for Rights.

In addition to the book, the vinyl box set “Hollywood Bowl 100: The First 100 Years of Music” will be available, containing seven LPs consisting of more than 50 live per­formance recordings from 1928–2021. The collection contains selec­tions from the classical, pop, rock, film, jazz, Broadway and American Songbook genres, with some of the performances being released for the first time. Featured artists include Billie Holliday (1955), Donna Summer (2008), The Doors (1968), Victor Young and Fred Astaire (1937), the Hollywood Bowl Orchestra (1999) and the Los Angeles Philharmonic under the direction of Gustavo Dudamel (2016).

The coffee table-style book and box set will be available for pur­chase starting opening night, June 3, at laphil.com and at the LA Phil and Bowl stores. The box set is available for pre-order at laphil­store.com. Full artist and track list­ing, along with a selection of audio samples, is available at hollywood­bowl.com/vinyl. 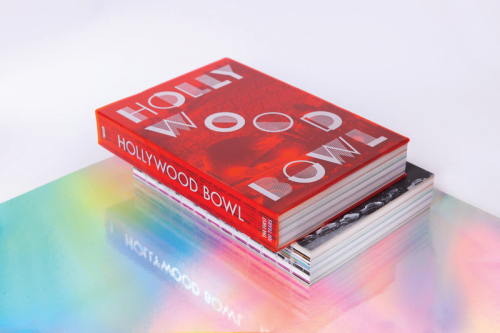 A new book covering the history of the Hollywood Bowl has been written by Derek Traub. (photo courtesy of the LA Phil)

“The First 100 Years” also will include a 10-episode podcast series. Each episode tells a story ranging from 1922 to today about the Hollywood Bowl in relation to a specific location at the Hollywood Bowl’s 88-acre campus, from Highland Avenue to the back benches. Written and hosted by Traub, the podcast shares never-before-told and long-since-forgot­ten stories drawn from dozens of oral history interviews and thou­sands of documents from the Bowl’s archive and historical col­lections across Southern California.

Each short episode, which will be approximately 7–10 minutes, can be accessed for free via podcast platforms or online at hollywood­bowl.com/first100years beginning June 3. Historical photos from the LA Phil’s archive will accompany each episode online. Listen in-per­son at the Bowl to enjoy the series as a self-guided audio walking tour.

For information about the Hollywood Bowl visit hollywood­bowl.com